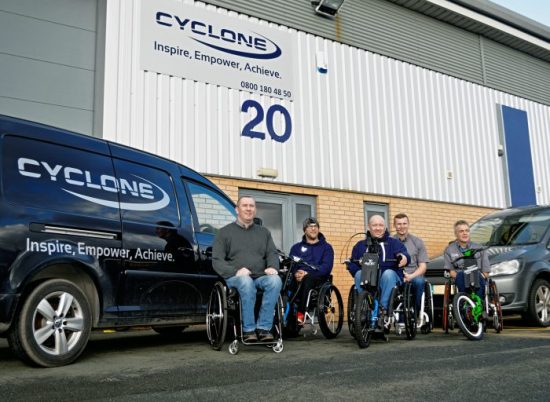 We’re challenging the norms when it comes to disability. We have the unique combination of expertise, personal experience and market-leading products to help you return to active living

We source and supply leading mobility and rehabilitation equipment from carefully selected providers, worldwide, so our customers have access to the very latest solutions. We are proud of our extensive product range and as keen advocates, only sell devices that we use ourselves; you can trust the Cyclone team with all your mobility and rehabilitation equipment requirements!

The main objective of our expert team, most of whom are wheelchair users, is to transform the lives of disabled people across the UK. Through a combination of therapies, services and great products, we will help you to adapt to your changed life and inspire you reach for maximum independence. We are here to share our knowledge and empower you to achieve your goals. 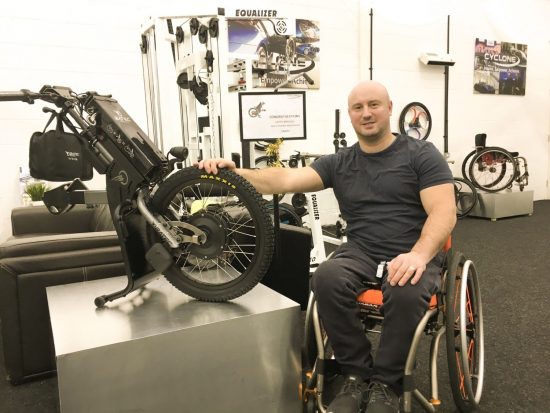 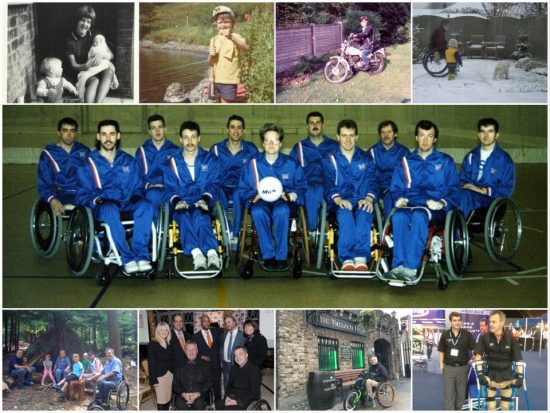 Stuart Dunne, Cyclone’s Managing Director, was born in February 1968, a perfect bundle of joy!  At the age of 17, plans were in place for Stuart to join the RAF and become a Tornado pilot –  the future looked bright.

However, later that year, life took a dramatic turn.  Following a road traffic accident in 1985, Stuart sustained a spinal cord injury (SPI) to the neck, which left him paralysed at C6/7. From that moment, things would never be the same for Stuart – life in a wheelchair beckoned.

With limited mobility and an uncertain future, Stuart was encouraged by medics to improve his fitness levels through a rehabilitation programme. Post injury rehabilitation through sport, (Ludwig Guttman principle), was considered an essential method of therapy. The aim was to help individuals build physical strength, improve self-respect and boost self-esteem. 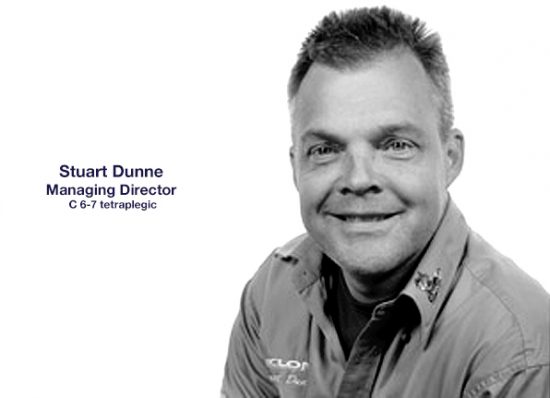 “Following my accident, I knew I had to focus on what I could do, because the alternative didn’t bear thinking about. After some research, I realised that options for those with SCI’s in the UK, were limited. So, I began to explore what was available to aid the life of those with SCI’s in other countries. This journey led to the discovery of alternative, mobility and rehabilitation equipment, and therapy options outside of the UK; in 1989, Cyclone was born.

Today, those with SCI’s face a much more positive and independent future. People now have access to a fantastic range of mobility equipment and rehabilitation options.”

Stuart started the company 'CJS Custom' and by making their own aluminium lightweight tailor-made wheelchair named 'Cyclone', it gradually built up the finances to be able to import a number of different lines of fitness and rehabilitation equipment from overseas, initially the USA, but then Europe and beyond.

In 1991, the company was rebranded 'Cyclone Mobility and Fitness LTD' and it was from this point on that Cyclone began to build its expertise on both the mobility aspects of neurologically impaired patients, and the fitness and rehabilitation goals.

Stuarts interest in FES started in 1997, when the team at Salisbury were working with SCI patients to gain functional recovery, and progressed to greater levels when in 2005 Restorative Therapies from Baltimore commercialised the use of FES in rehabilitation.

Cyclone began working with Exoskeletons in the early days of the media boom, however have since moved to more clinically effective solutions - the Xcite 12 channel FES system and the G-EO end effector gait training device. As progress and innovation change the rehabilitation landscape, technological developments allow the ever changing needs of the clinical centres to be addressed. Cyclone are perfectly positioned to deliver these new advancing technologies with their specialist clinical team headed by Matt White, MSc MCSP.

Check out how Batec can change your life!

Stuart Dunne was injured in 1985 following a road traffic accident, rendering him paralysed at C6/7. Stuart pursued sport during this rehabilitation, and this is where he realised there were many incredible products available; but not in the UK.

Cyclone Mobility started in 1989.  Stuart is Cyclone’s driving force and pushes his team, continuously to achieve its ultimate goal. To become the nations rehabilitation and mobility solutions centre for excellence.

Stuart, who is married and has two boys, has dedicated his working life to helping people with paralysis. Stuart sources cutting edge products from around the globe, that improve the lives of people with SCI’s. Stuart is a keen advocate of all Cyclone products. The very products that vastly improve his quality of life and in-turn, the lives of his family.

Mark Eccleston suffered a spinal Cord Injury at C6/7. Whilst in Southport’s Spinal Unit, he started playing Table Tennis and entered the National Wheelchair Games, Mark went on to win the Gold medal. Mark then played Wheelchair Rugby and was Captain of the Southport team at the National Championship. In 1992, he was selected to represent GB and became captain.

Mark retired from Rugby after the 1996 Paralympics and turned his attention to Wheelchair Tennis, where he went on to win 7 National titles. Mark became the first British tennis player to achieve World Number 1. He was also a member of the first GB team to win the World Team Cup and went on to compete in the 2004 Paralympics, achieving a silver medal.

Mark Eccleston became a Mobility Adviser for Cyclone Mobility in 2014, but has been part of Cyclone through sponsorship during his sports career by Stuart Dunne and the team at Cyclone.

When Mark isn’t at work, he enjoys watching sport including Liverpool Football Club and St. Helens Rugby League, and venturing out on his Batec Quad Hybrid.

Chris Chegwen was injured as a teenager which left him Paraplegic T10 since Friday 13th May 1977. In the ’80s, Chris started an engineering company and built it up to nearly 2 million turnover and at it’s max had 46 employees. He was one of the early pioneers, and in 1988 was awarded his pilots licence and since has flown many types of fixed and flex wing aircraft.

He became a check pilot in 2012 and has built 4 aircraft and restored 1. His current project is a 1,500 hr aerobatic build. Chris runs an airfield with 14 aircraft from gyros to gliders in his spare time.

Chris has worked for Cyclone for 15 years and we estimate has travelled nearly 3/4 of a million miles to help improve the lives of our post injury customers.

Mike suffered a Spinal Cord Injury at level C6/7 after diving into a swimming pool at the age of 17.

Since his accident, Mike went on to play competitive Wheelchair rugby, where he become Team GB’s captain at the Paralympics.

In his spare time, he enjoys rowing, watching sports (in particular football), and he’s also a car enthusiast.

Alex Toon achieved a level 2 NVQ in Carpentry and Joinery in 2011 and put his skills to the test when he went to work on barn conversions. In 2013, Alex started working for a maintenance company, specialising in repairing tall buildings.

In February 2014, Alex suffered a SCI at T10/11 in a downhill Mountain Biking accident, but that hasn’t stopped him living life to the full. He flew to Florida, USA, to take part in Project Walk Orlando and after three months of intense, unforgettable recovery, he returned home and carried on his fitness regime. Alex became a regular user of Cyclone’s FES solutions. In 2015, he joined Cyclone as an FES Advisor, and continues to help customers achieve their full potential.

Alex’s passion is cars, with a particular focus on classic Mini’s. His spare time is spent in his garage, fixing up his own 1989 Mini Mayfair.

Karen was a wheelchair rugby official in the 90’s and has been around people with wheelchairs for over 20 years. She has a knowledge of disability and empathises with the needs of people with limited mobility.

Karen works full-time at Cyclone Mobility and is the mother of two young boys. She is dedicated to helping Cyclone customers get the most out of their Cyclone experience.

Karen’s hobby is running and has competed in the Great North run 7 times.

After graduating as a physiotherapist, Paul specialised in neurological rehabilitation. He has gained five years experience working in a range of private and charitable rehabilitation centres.

Paul began his role as Clinical Support Officer at Cyclone in April 2018. He has an interest in the rapidly emerging field of rehabilitative technologies, and wants to empower individuals to manage their neurological condition.

We use cookies to ensure that we give you the best experience on our website. If you continue to use this site we will assume that you are happy with it.Close