Chris has been using the RT300 over 4 times per week continuously for over 18 months, completing 380 sessions. From looking at the progression Chris has made from starting his FES cycling journey in July 2014, it is clear that regular and constant use has been extremely effective. 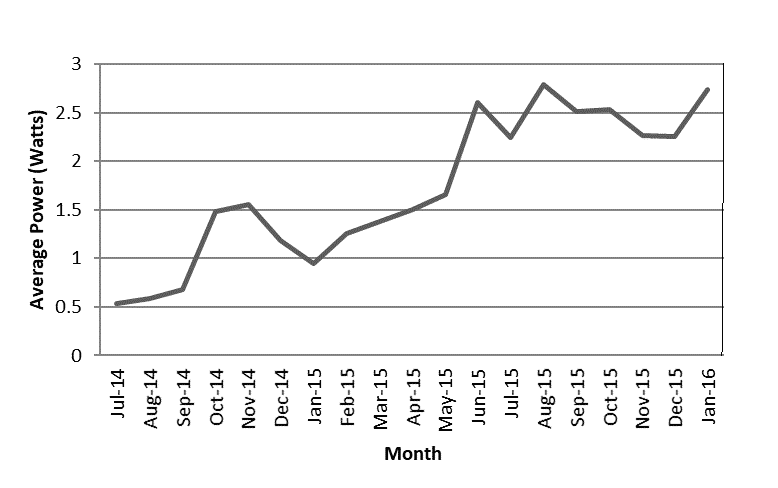 During the first 3 months of use Chris saw little overall improvement. Due to having a very low tone presentation this was not all together surprising, however a visit from our FES specialist and M.D. Stuart revealed that Chris was positioned slightly too far away from the bike, meaning that the stimulation was not being applied through the muscles at the optimum point, thus any power generated was not transmitted through the pedals.

After this intervention an immediate improvement is seen throughout October and November 2014. A general reduction in power production is observed through December and January, however following this has been a steady consistent increase in power production for an entire year.

Chris’s case illustrates how the intervention of an experienced FES cycling specialist, however small, can have a dramatic effect on performance and progress. Furthermore, the SAGE technology incorporated into the RT300 provides automatic progressions of speed and resistance based upon performance, to increase the workload progressively as the muscles demonstrate their capability.

In Chris’s case, these automatic progressions have allowed him to continually increase in power output as his muscles have got stronger, without him having the adjust the settings himself. The red markers on the graph above illustrate the approximate time points at which the SAGE software progressed Chris’ workload.

One-to-one ConsultationWe'll visit you to discuss your options

With the majority of the country self-isolating, we thought we'd do our bit to keep the boredom at bay. We've produced a quick quiz to keep you alert in between whatever Netflix series you're currently….

Batec – The ultimate commuting companion For wheelchair users, commuting to and from work can sometimes be a challenging and daunting experience. With the help of a Batec wheelchair electrical attachment, this doesn’t need to….