What is Functional Electrical Stimulation (FES)?

Various types of waveform can be applied using different devices that can influence the specificity, effect, ease of application and comfort. For optimal effects the peripheral nervous system is required to be intact, so the neurological compromise is central nervous system (brain and spinal cord) in origin.

This is not to say effects cannot be gained with damage to the peripheral nervous system, but they are likely to require much higher levels of current and will generate smaller, less powerful contractions.

The benefits of FES

Using FES will create patterned movement in the arms, legs and trunk. This will enable the muscles to work and perform activities even though they may be weak or paralysed through neurological disease or injury. This activity will:

How does it fit into rehabilitation therapy?

During passive therapy, muscles don’t actually do any of the work. Arms legs are moved mechanically by a non-FES cycle. Active therapy allows muscles to do the work they are meant to do. This is achieved either by an individual moving their muscles on their own, or when muscles are activated by FES.

This means that active therapy ensures muscles are working and performing the activity.

Where can it be used in the continuum of care?

FES systems can be applied across the continuum of care from the acute phase to chronic intervention. For some FES is a short-term intervention. Whilst, for others, where recovery is longer or less function is regained, patients may benefit from using FES long term at a facility in the home.

How does Functional Electrical Stimulation work?

Electrical stimulation causes activation of the voltage-gated ion channels, causing entry of sodium ions into the nerve tissue, resulting in a less negative charge within, until the threshold is reached, and an action potential is generated.

It is important to recognise the difference between physiological and FES-evoked muscle activity. Physiologically normal muscle activity is efficient and based upon need. It follows the “size-principle” in that small diameter muscle fibres (Type I) are activated first. As the demand increases, larger diameter muscle fibres are recruited to increase force.

FES evoked muscle activity is not efficient, being involuntary, and uses randomisation of the “size-principle”. As a result, whichever nerves fibres receive sufficient stimulus to reach threshold are recruited, which in practice results in large diameter motor neurons, which recruit fast twitch muscle fibres being activated most readily, but these tire quickly!

Therefore, it is important that you do not stop the stimulation increasing at the very first moment you see a visual muscle response to ensure that sufficient current is applied to activate as many muscle fibres as possible.

The effect of frequency

Frequency is the number of pulses delivered each second, measured in Hertz (Hz). At low frequencies (2-10Hz) twitch contractions occur as the individual muscle fibres are allowed to return to their resting length between each pulse. As the frequency increases, the contraction becomes gradually more sustained as the fibres are unable to return to their resting length between pulses until full tetany is achieved. Frequency of the pulses has been studied extensively because of its important role in determining the torque development and controlling muscle fatigue (Gorgey and Dudley, 2008).

The effect of amplitude

The effect that current amplitude has on evoked torque and activated muscle CSA has been previously investigated. Adams et al (1993), showed that increasing the current amplitude in a manner to increase stimulation from 25% to 75% of maximum voluntary isometric torque (MVIT) increased the percentage of knee extensor muscle group activated from 18% to 54%.

Gorgey and Dudley (2008) demonstrated that increasing the current amplitude resulted in a proportional increase in the torque produced and the size of the activated CSA of the stimulated muscle and cite work by Levangie and Norkin (2005) stating that the rate of muscle strength recovery following anterior cruciate ligament injuries has been associated with the stimulation at higher percentage of MVIT.

However, increasing current amplitude to maximise torque output and to produce clinically meaningful percentage of MVIT was limited by participants’ tolerance to the stimulation, and not all healthy participants were able to tolerate such a high level of stimulation. Therefore, a patient’s pain tolerance to electrical stimulation is considered another limitation to the process of maximising torque output.

Furthermore, work by Doucet, Lam and Griffin (2012) states that when the amplitude is turned too high, it can limit central nervous system (CNS) involvement, which may limit rehabilitation effects by using only peripherally mediated impulses in those with intact CNS input.

The available pulse widths in FES devices vary, most commonly between 150 and 300us, however much wider variations (50us to 2500us) in pulse width can have differing effects upon the target muscle tissue.

Practically, a longer pulse width causes the stimulus to remain in the tissues for longer, depolarising a greater number of nerve fibres, indiscriminate of motor, sensory or pain. Higher pulse widths have been shown to generate greater levels of torque and can often allow tetanic muscle contractions resulting in physiological joint movement at lower levels of amplitude, which can be useful when attempting to maximise torque in those with intact sensation.

However, when looking for a specific muscle contraction, for example, a bicep’s, if too great a pulse width is applied it is common to see overflow into surrounding or opposing muscle groups. Compared to pulse frequency and current amplitude, the role of pulse duration is less appreciated in its possible influence on maximising torque output.

Moreover, a pulse duration of 450 microseconds has been shown to be effective in conducting electrically induced resistance training in individuals with spinal cord injury (Kendell et al., 2006, Burnham et al., 1997, cited by Dolbow and Gorgey, 2016).

However, despite this evidence, most researchers have used pulse durations of 300 microseconds or below in their studies, which could potentially limit the outcome of Neuromuscular Electric Stimulation (NMES) protocols in maximising elicited torque output. The controversy regarding pulse duration selection reflects the limited amount of knowledge regarding the optimal pulse duration required to maximise torque output. 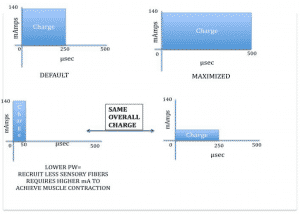 However, as stated above, patient tolerance is the determinant of how much charge may be applied. Manipulating both amplitude and pulse width can help to generate sufficient charge to result in a forceful muscle contraction, without becoming unbearable for the patient.

For this analysis, we have identified a patient that:

Is 40 years old
Has suffered a Spinal Cord Injury (SCI) following a fall down the stairs
Was diagnosed with a complete SCI at the level of T6
Was previously healthy
Had a BMI 24.5 pre-injury
Has a life expectancy of 69 years (Reyes and Molton, 2009)

Now, we need to consider what the common complications are of a person with an SCI. These include:

The two areas where there is strong evidence that FES can make an impact are spasticity and pressure ulcers (PU). So, let’s look at each of these in turn.

The most common management strategy for Spasticity is the use of Baclofen (either orally or intrathecally). Rushton, Lloyd and Anderson (2002) estimated cost for this treatment at £181,545.00 per annum for a cohort of 100 people. Calculating the lifetime cost for our case study is achieved as follows:

In 2004 the annual cost on managing PU in UK was £1.4–£2.1 billion (4% of total NHS budget) (Bennett, Dealey & Posnett, 2004), and it has been reported that patients with SCI are among the highest risk population for developing pressure ulcers, with an incidence of 25–66% (Kruger et al. 2013) and prevalence of 1.5 pressure ulcers per person per year (Scheel-Sailer et al., 2013).
In their comprehensive review of costs of managing PU, Bennet, Dealey and Posnett (2004) reported that the average cost of treating a single Grade II PU. was £4,402.00.

Calculating the potential lifetime cost of our case study is achieved as follows:

Calculations of cost of equipment are based upon the most popular of the Restorative Therapies’ Products, the RT300 SL, for stimulated leg therapy.

The cost of the electrodes is £50.00 per set. Recommended usage is 3 sessions per week, and manufacturer estimations of electrode lifetime is 15 applications.

Ongoing clinical and technical support and servicing costs are £1,200.00 per annum.

Lifetime cost for our case study is calculated as follows:

The potential healthcare saving, only taking into account elimination of Baclofen and prevention of pressure ulcers, may be calculated as follows: