During the 90s an evolution in design was entering the cycle industry. Mountain bikes were taking a new shape; the frames were becoming more tough looking, bigger oval tubing was taking over from the 1” double butted frames of the 60s, 70s, and 80s and yet the frame weight was becoming lighter. This phenomenon was led by the US manufacturer from Wilton, Connecticut named after the train station there, Cannondale had come a long way since their birth in a crowded loft above a pickle factory in 1971.

In 1997, Cannondale was the first company to feature large, oversized aluminium bike frames on cycling’s biggest stage, the Tour de France. After powering his Cannondale to four stage victories at the 1999 Tour, the flamboyant Saeco team leader proclaimed, “Cannondale is the best bike.”

With a reputation for shaking up the industry, they continued to push the entire cycling community, and their creative reputation encouraged both bike dealers and customers to join the revolution, and widespread industry scepticism quickly gave way to a host of imitators.

But what about the wheelchair industry, in 1979 Marylin Hamilton had founded a company Motion Designs with two colleagues from the world of hand gliding and revolutionise the work that Jeff Minebraker had started earlier that decade, aluminium had entered the world of wheelchairs before it was mainstream in the cycle industry.

Read the inspiring story of Quadra and the legends that rode them, Kiley, Ball, Boegel, and Hamilton here and watch Jeff in film here. The legendary Marty Ball talks here about history and future of wheelchairs and their users, and Marilyn can be seen in video here on her own web site.

But the Cycle industry had moved forward to large oval tubing, and yet nobody in the wheelchair industry followed. Large tubing was where Minebraker had started albeit square, so why didn’t the industry that created freedom and style in aluminium wish to go that step farther and design the most stylish and iconic aluminium mobility tool ever, maybe Jeff would have if investors hadn’t driven him out.

The key reason for hesitation was manufacturing process, the cycle industry didn’t bend large oval tubes so could it be done, in the early 2000’s Cyclone perfected a revolutionary technique to bend and form the oval-shaped tube and finish it with precision engineering, and so the XLR-8 was born. The brainchild of Mike Dunne, a keen Mountain biker, chief engineer at Cyclone, and brother of Stuart Dunne Cyclone’s founder and Managing Director today.

From 2002 through to 2013 the XLR-8 was made, 100’s being produced and sold with many still being used to this day, with appearances on East 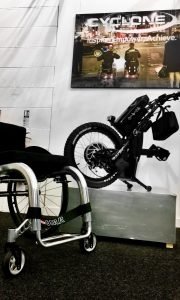 Enders and representation at many Paralympic games the XLR-8’s rough exterior, ultimate performance and durability made it first choice of Paralympic Gold Medallist John Stubbs, “It’s been around the world with me, in and out of 100’s of planes and never let me down. I wouldn’t be without my XLR-8”.

When the doors closed to the factory manufacturing wheelchairs, Cyclone became distribution agents for world-class mobility from Poland and Italy, but the passion that gave birth to the XLR-8 has never died, so Stuart together with Danilo Volpato, Managing Director of OffCarr Wheelchairs embarked on a redesign of the XLR-8 with the view of re-launch in 2018/19.

18 months of research, planning, designing, and fabrication produced the new sturdier, lighter and more streamline XLR-8. 15 years after we lost the designer and inspirator, the XLR-8 will hit the production line once more.

We are proud to remember the early days but even prouder to say we’ve got the best lightweight wheelchair in the world at Cyclone. The OffCarr XLR-8 win one at Naidex or buy one to last forever.