An Interview with Aaron ‘Wheelz’ Fotheringham

Aaron Fotheringham, better known as ‘Wheelz’, is a WCMX (Wheelchair Moto-cross) athlete from Las Vegas. Wheelz was born with Spina Bifida resulting in him having no use of his legs. This however, didn’t stop him from achieving his goals and becoming one of the key faces on the emerging WCMX sport scene.

We here at Cyclone were lucky enough to talk briefly with Wheelz, and managed to ask him some questions about his life, inspirations and what it takes to become a WCMX rider. 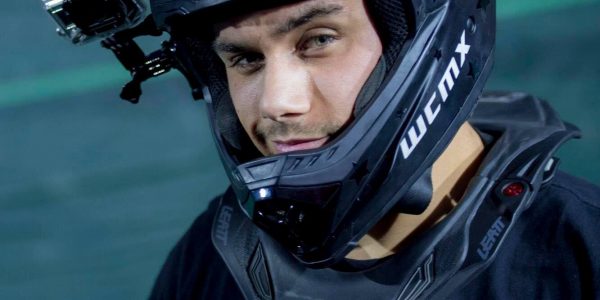 What inspired you to take up WCMX?

From a very young age I loved watching Xgames, and I would dream about being a professional extreme athlete. My older brother Brian rode BMX, and I ended up at the skate park one day with him and he gave me the idea to try it on my wheelchair and after a few failed attempts I managed to roll away successful and from that moment I knew this is what I wanted to do.

What major obstacles did you need to overcome to achieve your goal of becoming a WCMX rider?

One of the major obstacles I had to overcome to become a WCMX rider, was fear! And I wouldn’t say that I have fully overcome my fears but I have managed to not focus on them! Especially before trying some of the bigger tricks, it’s very easy to have a lot of fearful thoughts in your head, and at some point I have learned you have to trust that your body knows what to do, and shut off your brain so you don’t think about all the things that could go wrong. And another obstacle was that I kept breaking parts and wheelchairs, it was frustrating at times because every time I would go to the skate park I would break my chair. But thankfully I met a man by the name of Mike Box who I have worked with over the years to now develop a chair that holds up the the abuse.

Who in your life has inspired you the most?

I have always looked up to Chad Kagy, Travis Pastrana and Bob Burnquist. These dudes have inspired me to not be afraid of dreaming big. They have all accomplished so many things in their careers and I attribute a lot of my drive from watching these legends!

In the UK, it can be argued that the WCMX scene is still an emerging one. What do you think it takes for the sport to grow in the UK and what message would you tell someone who would like to start getting into the sport?

Without a doubt WCMX is still a growing sport, but it would be really cool to see more chair users in the UK shredding. I think the more people see the sport, and know that a lot of different ability levels are able to participate then it shall surely grow!

I would say to anyone that wants to get into the sport; at first it can seem very intimidating, but with small steps, and a helmet they can try out.

What milestones have you set yourself for the future, and how do you think you will achieve them?

I have a lot of goals for the future, not only do I dream about WCMX becoming a mainstream sport, but I also have dreams of continuing to help progress the sport by landing bigger and more technical tricks. One trick I am currently working towards landing a double front flip, it’s scary but it’s a lot of fun and to make this one happen I will need more airtime and that means a bigger ramp haha!
Written by An Interview with Aaron ‘Wheelz’ Fotheringham

One-to-one ConsultationWe'll visit you to discuss your options

Throughout lockdown and beyond we’ve been working with our customers to ensure that you receive the highest level of customer care. All our demonstrations and assessments can be conducted socially distanced and contact-free and, unlike….

What is Access To Work Funding? Access To Work funding is a Government-run scheme that aims to eliminate barriers to employment for people with mental and/or physical disabilities. The scheme gives grants to cover the….

Since the lock-down started, we have been working hard to ensure that our life-changing mobility and rehabilitation products are still available to those who need them most. We are now in a position to return….

We use cookies to ensure that we give you the best experience on our website. If you continue to use this site we will assume that you are happy with it.Close