Batec conquers the Rock of Gibraltar

Peter Lau and Brian Abram are both recently injured complete spinal injury wheelchair dependant adults. Brian was injured in 2013, and Pete in 2014, their wives are both able bodied. They booked a cruise around the Mediterranean in 2017 as an ideal way to travel and take a holiday and decided to take their Batec’s with them. Their Batec’s would be invaluable in allowing Brian and Peter to take full advantage of the numerous shore excursions planned during the cruise.

Gibraltar was the last stop on the cruise. Here, the main attraction is a visit to the top of the huge rock that towers over the port and town. Access is a cable car that was built in the 1960’s. This was their first point of call.

The party made its way to the cable car base station, a distance of just over a 4km from the cruise ship port. On arrival they tried to access the cable car access tower – oh no, stairs! And many of them.

Sadly, disabled access was not considered when the facility was constructed and has not been added since. A major setback to their planned visit to the top. Sad too, that the only vehicle that could carry two wheelchair users was not available for several hours and would come at a cost of 80 Euro’s.

After a short discussion they came up with a plan. The girls would take the cable car to the top; while Brian and Peter would make their own way up using their Batecs. All rendezvousing at the top cable car station.

The girls joined the queue for the cable car while Peter and Brian bought a map of the rock. They soon identified a couple of roads that both made their way to the very top of the rock. The shortest route would be the steepest, but a longer road was available that would take a little longer, but it would be less steep.

The road made its way out of the town, at a steady incline upwards. Very soon the pedestrian paths stopped, meaning they had to stay on the road. This was very busy with minibuses carrying fellow tourists up the rock. Higher and higher they climbed taking in the spectacular scenery that was opening up the further we progressed skyward.

Battery levels were taking a beating as the incline was so very steep, but progress was maintained at a good pace. Brian had to swop to his spare battery, but Peter’s was still showing plenty of charge left.

One third of the way up

Their first stop was the Apes Den, about a third of the way up the rock. This gave a pleasant view of the cruise ship and wonderful views across the bay. Here they also came across the first group of resident monkeys that inhabit the rock.

The road then became even steeper, scrub land and monkeys on one side, a vista view and large drop on our other, again followed by many tourist buses with astonished tourists seeming surprised that two wheelchair users had managed to get so far up the hill on their own

After a brief scenic view stop they decided to press on, tyres had taken a beating but were still holding tread, batteries were still showing several power reserves so onward and upward they pressed. At each hairpin corner the road became steeper, after several more twisty turns and many hundreds of feet they took a stock of their position. 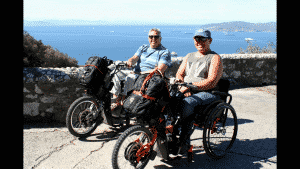 Brian and Peter were keen to not completely exhaust both their batteries as the girls wanted to visit the shops once they had finished their visit to the top of the rock. Also, the need for being push-assisted the several kilometres back to the cruise ship would not go down too well, it was very warm and far too hot for such exertion.

They found that the next hairpin bend revealed that the road got even steeper! This was no small ask of the Batec power units, but in true British spirit they carried on.

The road was now so steep that they could only keep front wheel grip by snaking side to side. Further up to a gate across the road. The access to the summit cable car station was now closed, only passable by military or service vehicles. Looking at the surface of the track it was very rocky in places too. It seemed like the end of their attempt.

Their only option to get to any part of the rocky top was to take a service road up to the gunnery point named O’Hara’s Battery. This is the site of a large artillery gun located on the far eastern side of the summit.

This took them past the point named “Queens Balcony” the site that HRH Queen Elizabeth II visited during a royal tour of the rock. Giving more wondrous views of the unfolding views below. They also received many surprised comments from people travelling up on foot.

Up, up and more up, occasionally progress was very slow due to the incline and wheel spin.  At times they had to use the electric power and push one of their wheelchair wheels just to keep moving but the top was just around the next corner.

As they turned this corner they were confronted with a gate across the road. The top portion of the road was closed due to maintenance workers installing telecommunications equipment on the top. It looked like their attempt to conquer Gibraltar was going to end in glorious failure.

But, out of nowhere a couple of workers appeared and came to the gate, in broken Spanish Peter explained what they were trying to achieve.  Amazingly, the guys agreed to let them pass through the gate and visit O’Hara’s battery – the highest point at 426M. They even agreed to take a few pictures to record the Batec’s achievement.

And then the downhill! It had taken quite a while to get to the top, getting down was going to be a lot easier but could potentially be quite dangerous if they got it wrong.

Down, was very rapid, the bumps of the road and any lack of suspension made for an interesting ride. Brake fade was also a real possibility especially given the steepness of the decline. To give brakes a rest, a stop was made at St Michael’s caves, here gave many more photographing opportunities with the resident monkeys. Peter was also quite pleased that he discovered a disabled toilet. 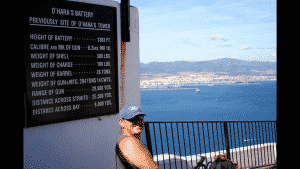 Then more downhill, and lots of it!

The full descent to the bottom took less than 15 minutes. The brakes held up, the only casualty was a now balding front tyre, stripped of any tread from the side-to-side weaving to get up the hill. A small price to pay for what had been achieved.

So many of the staff working on the rock told them that they had never seen a wheelchair make it to the top on its own. A testimony to the quality, ability and capability of the Batec units.

A quick route into town and they managed to meet up with the girls, then off for beer and shopping.

So, true British spirit, coupled with Catalonian engineering made it to the top, and conquered the Rock of Gibraltar. Something the rest of Spain has been dreaming about for years!

Find out more about the amazing Batec range 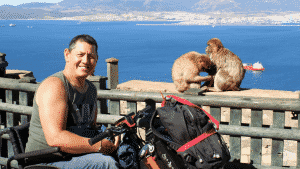