Batec Scrambler – The legend is reborn. 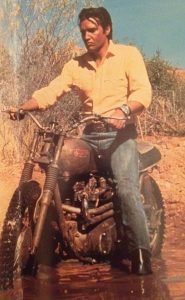 In the early days of motorcycling, particularly in the late 1920s in Britain, riders enjoyed racing from check point to check point across the countryside. Rules were few and far between, but the general aim of the game was to get from one place to another in the fastest time, over whatever obstacle and terrain happened to be in the rider’s way. Fields, hedges, hills, streams, woodland, and a lot of rain – those the primary ingredients of the British countryside, and since the motorcycles of the day weren’t particularly adept at churning up dirt and thrashing across unpaved roads, conventional road-focused motorcycles needed to be specially adapted to their new purpose.

Thus, the earliest scramblers were born. Naturally, evolutionary refinement didn’t take long, especially since this kind of riding started to become popular and accessible across the world. With the advent of more scramble-style competitions, enduro races, and motocross, by the 1960s scrambler motorcycles were at their pinnacle

It’s arrival marks almost 60 years since the motorcycle scene developed the world of Scramblers, and now Batec the leaders of the electric attachments to manual wheelchairs have recovered those iconic moments of the 1960’s and created the most versatile add on ever.

The Batec Scrambler is as comfortable cruising along tarmac pathways as it is dirt trekking, obviously hedges and ditches aren’t in it’s vocabulary but with its suspension stand frame you still have that unique Batec ClicknGo system and now the ability to ride rough shot without clipping tree roots etc. 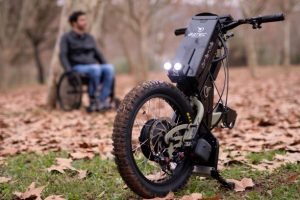 he extra fuel in the tank to trek the distance.

Everything on the new Batec Scrambler has been carefully thought out, the brighter double headlight (with dipped beam or full) allowing you to trek after hours in the deep dark forests, the new electronics with reverse, and perfectly located single touch switches to change mode and switch lights on without taking your hands off the handlebars. The meaty 19” ultra grip tyre, Avid BB7 Brakes on 200mm disc with Aluminium levers, ultra wide handlebars all give the Scrambler ultimate control in any condition.

Stop dreaming, get a Scrambler ordered, if the limited run of 30 came and went before you had chance to get your order in, then now is your chance. Orders will be taken at Naidex 2019 and onwards, with the first units rolling off the production line in June.