Allan Ritchie, from Scotland, has been a T10 incomplete paraplegic since a spinal cord injury in Dec 2014. “It was a monumental shift in my life which, I will be honest, significantly eroded my self-esteem and self-confidence,” said Allan.

A friend subsequently took him to shooting towards the end of 2015 and he took to the sport immediately. When he heard that the Olympic trap had been recognised as an IPC sport and the first Para trap world cup would be held in Italy in 2017, he was determined to take part.

Para trap shooting is where the competitors hit clays in the air, that are fired from machines on the ground. Due to the nature of the sport focusing on technique, concentration and mental strength, it makes it very inclusive allowing athletes of all physical abilities to compete.

Allan took part in the World cup, which was held in Lonato and won silver, coming within 2 points of the gold medal. In March of this year he went one better at the World cup in the UAE achieving gold in the PT1 seated competition. He now wants to represent Great Britain at the next Paralympic games.

To help him get around. Allan purchased a Batec Rapid from us back in early 2015. After he had collected the Batec he told us, “I’m grinning so much, the top of my head’s fallen off. What a cracking bit of kit. Total life changer.

“The guys at Cyclone are spot on. Matt even hooked me up to one of the FES bikes. First time my legs felt like my legs in ages!” Since then we have helped him out by loaning a travel battery for his Batec when he is flying abroad for competition.

We wish Allan every success in his bid to represent GB at the next Paralympics in Tokyo. 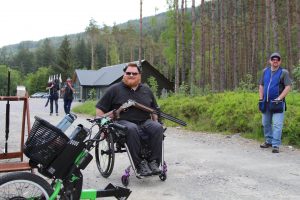