LipSync – allowing those with limited hand movement to use a Smartphone

It is forecast that by 2019 around 2.5 billion people worldwide will be using a touch-screen smartphone. While most of us now can’t imagine life without one, the benefits are not available to everyone. High-level tetra patients for example, who cannot use their hands, are missing out on the undoubted benefits, lifestyle improvements and independence that a mobile phone can bring.

Now, fortunately somebody has addressed this. Work in Canada by the Neil Squire Society has led to the creation of a product called the LipSync.

What the LipSync does

Using a Smartphone requires considerable hand and finger dexterity, something which high-level tetras do not have. The LipSync overcomes this by allowing the user to operate a compatible Smartphone or laptop without needing to use their hands. This is done through a hollow mouthpiece that is attached to a miniature precision joystick sensor. This requires only slight pressure to move a cursor on the screen up and down, or side to side.

Similarly, puffing or sipping into the tube allows the user to perform taps on the screen or clicks on the mouse button. There are various actions that can be used for the different activities needed to operate the device. For example, a short sip will simulate a tap action, while a puff will simulate using the back button. Longer sips and puffs activate secondary features like tap and drag.

Unfortunately, Apple devices don’t have external mouse support and so can’t be used currently with LipSync, but Android devices are no problem. 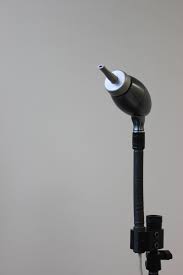 Sadly, you can’t buy the LipSync anywhere, as the project is Open source. This means you can download the schematics and plans for the hardware and assemble it locally. It can be built in as little as a day as the device’s 3D printer files, component lists and microcontroller code are provided in the download.

Maybe in the UK, someone like Remap can get involved to build a few?